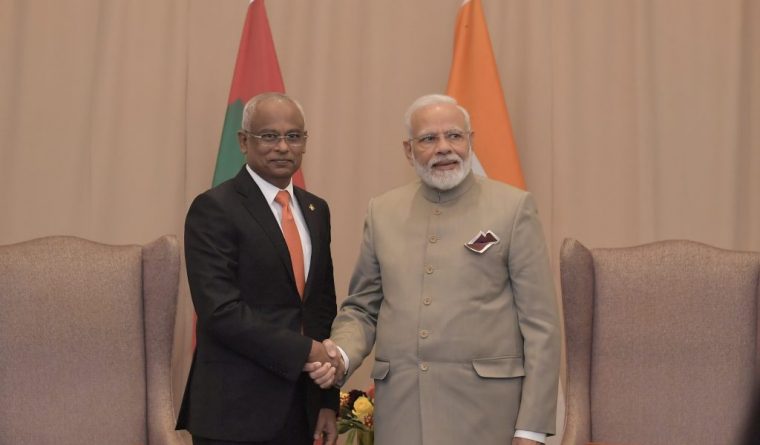 Bilaterals: President meets PM of India at the United Nations
8 months ago

His Excellency President Ibrahim Mohamed Solih has today met with the Prime Minister of India, His Excellency Narendra Modi on the sidelines of the United Nations General Assembly.

Speaking at the meeting, the President said that enhancing ties with India and other countries of the Indian Ocean Region is one of the main priorities of Maldivian foreign policy. Speaking in this regard, the President expressed his delight with the opportunity to showcase the strength of the relationship between the Maldives and other Indian Ocean countries while hosting the 4th Indian Ocean Conference earlier this month.

He highlighted that the many areas in which the two governments agreed to cooperate, including key development and infrastructural projects, as well as economic cooperation, and further stated that some of these projects have progressed to the implementation stage and that the Maldivian people are already beginning to reap the benefits of this cooperation. The President also congratulated PM Modi for India’s work as a leader of pragmatic climate action, particularly at the UN Climate Action Summit.

The Prime Minister noted that the Indian delegation returned immensely happy from the IOC held in the Maldives, and congratulated the President for successfully hosting a conference of such magnitude.

He further highlighted the increased bilateral cooperation between the two countries since President Solih’s administration took office. Conversing on ways of taking forward the Maldives’ and India’s mutual interests in the international arena, the two leaders noted that the ongoing United Nations General Assembly provides a singular opportunity to accomplish this end.

Ending the call, both leaders expressed their resolve to continue to work together towards mutual benefits and to preserve the historic friendship between the two countries.